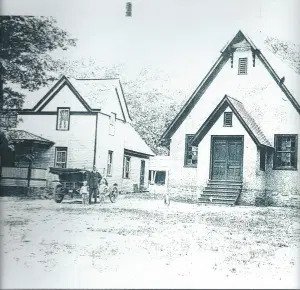 The Reems Creek Presbyterian Church, established in 1791,  was one of the first three Presbyterian churches to be founded west of the Blue Ridge Mountains.  Rev. George Newton, educator and first pastor of Reems Creek Presbyterian Church, also founded the Newton School in Asheville.  The first church on “Rims Creek” was built on the farm of Col. Robert Williamson.  A separate session house where the elders met is still part of the big white farm house once owned by Blanche Roberts Robertson on Parker Cove Road and can easily be seen from Reems Creek Road.  When Blanche was living she said that this room had been paneled and the logs were no longer visible.  She used it as her dining room and den.
​
In 1870 property was bought in the Hemphill community and Richard Sharp Smith was commissioned to design a building.  Smith, a talented architect, came to Asheville in 1889 as the supervising architect of the Biltmore House and established a private practice in 1895.  The Reems Creek Presbyterian Church building, now St. Matthew’s Anglican Church, was built in 1902. 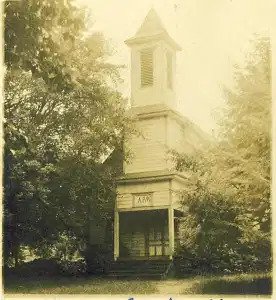 Around the same time the church was building on Reems Creek, in 1878,
​Rev. Alfred Marion Penland, with support from some members of Reems Creek Presbyterian Church, petitioned the Presbytery to allow them to build another church in the Beech Community, two miles up the road.  Travel at that time was by horse, wagon, or on foot, and the two miles were a hardship for some.  Rev. Penland, an ordained Presbyterian minister, educated at Union Theological Seminary in New York City, had grown up in the Beech community and returned with his wife to open a school and serve as pastor of the church.  A wood frame church, completed about 1889, was built on the Penland property in the Beech community, south of Reems Creek, along Sugar Cove Road.  The church faced north toward the creek and was named the Beech Presbyterian Church.

In the 1930s, a $2,500 grant was obtained from the Board of National Missions of The Presbyterian Church, U.S.A. for materials to build a new church on the property to replace the aging wooden structure.  The labor was provided by, or paid for, by members and friends of the church.  The new rock church, which now faced west on Sugar Cove Road, included a sanctuary, community room with fireplace, three Sunday School rooms, and a basement.  A service to commemorate the Laying-of-the-Cornerstone, dated 1937, took place in March of 1939.  A kitchen and pastor’s study were added in the late 1950’s.
The Joining of Two Churches
The change in modes of travel and the sharing of pastors, events, and purpose over the years brought the two churches back together. In 1958 the Beech Presbyterian Church and the Reems Creek Presbyterian Church combined to form the Reems Creek Presbyterian Parish.  Initially, each church retained separate governing boards, separate Sunday Schools, and kept finances separate.   One pastor served both churches.  Later, Sunday Schools and worship services were joined and services were conducted at the sites on alternate Sundays.
​
A fellowship hall was added in the 1990’s and in 2003 the churches joined to become one, the Reems Creek-Beech Presbyterian Church, and chose the Beech site as the primary worship center.  The Reems Creek site was leased to another church in 2006 and in 2007, sold to St. Matthew’s Anglican Church.  In 2008 an addition was added to the Reems Creek-Beech Presbyterian Church for education and youth ministries.

Today we cherish the history, honor those who have worked so diligently to do God’s work, and continue to share the blessings He has bestowed.​